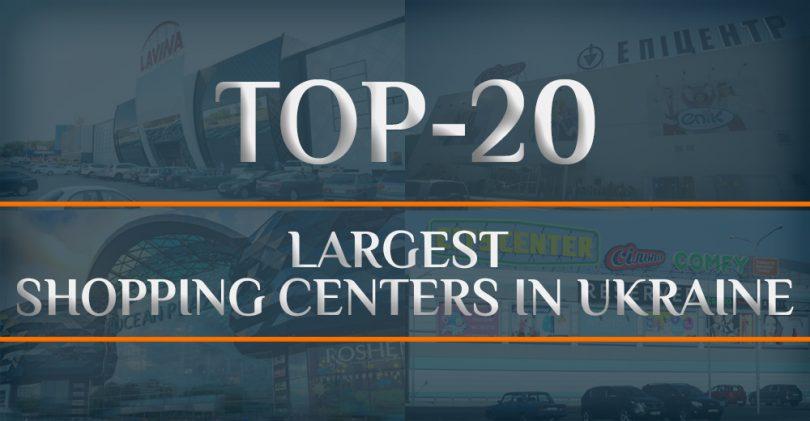 Time of the Giants: the TOP-20 largest shopping centers in Ukraine

The TOP-20 shopping centers in Ukraine include eight metropolitan SC, among which Lavina Mall, Ocean Plaza, Sky Mall, Prospect and Epicenter, as well as the largest facilities in Odessa, Dnepr, Kherson, Lvov and other cities.

Editorial RAU represents the rating of the largest shopping centers in Ukraine by rental square (GLA). The 20 largest SECs list in Ukraine contains objects that fall under the shopping center definition according to the classification of ICSC – the International Council of Shopping Centers. Among other things, this classification provides that the shopping center should have centralized management. And the main anchor tenant should occupy no more than 90% of the object’ total square. The minimum number of lots for rent should be at least 20.

The rating includes all the largest SC in Ukraine, regardless of its geographical location, with the exception of the temporarily occupied territories of the country eastern regions and the Autonomous Republic of Crimea. Note that the final TOP-20 would look different taking into account these territories, which have been occupied by the Russian Federation since 2014. For example, the 12th place in the rating would be occupied by Simferopol Meganom, the rental square of ​​which is 55,120 sq. m, and the total square – 81,500 sq. m.

It should also be pay attention to the presence in the rating of the shopping facility chain Epicenter K. Business, which began as a DIY-hypermarket chain, went beyond the DIY-format over the years of work on the market. Now the company is positioning itself as a shopping centers’ chain. Despite this, only one SC Epicenter meets the ICSC classification – a shopping center on Polar str. in Kiev. Third-party retail operators, including Silpo supermarket, Zolotoy Vek jewelry store chain, a number of restaurants and others occupy a significant part of the premises in the facility. It is interestingly, if it were not for ICSC restrictions, six more retailer’s SC could qualify for getting into the TOP-20: three SC Epicenter in Kiev – on 40 Grigorenko Ave. (sales square 42,708 sq. m), on 6B Berkovetskaya str. (73,858 sq. m) and 11A Bandera Ave. (56,000 sq. m), two near Odessa – in the urban village Avangard (66,880 sq. m) and village Limanka (51,425 sq. m), and one in Nikolaev on 1 Kherson highway (42,000 sq. m). 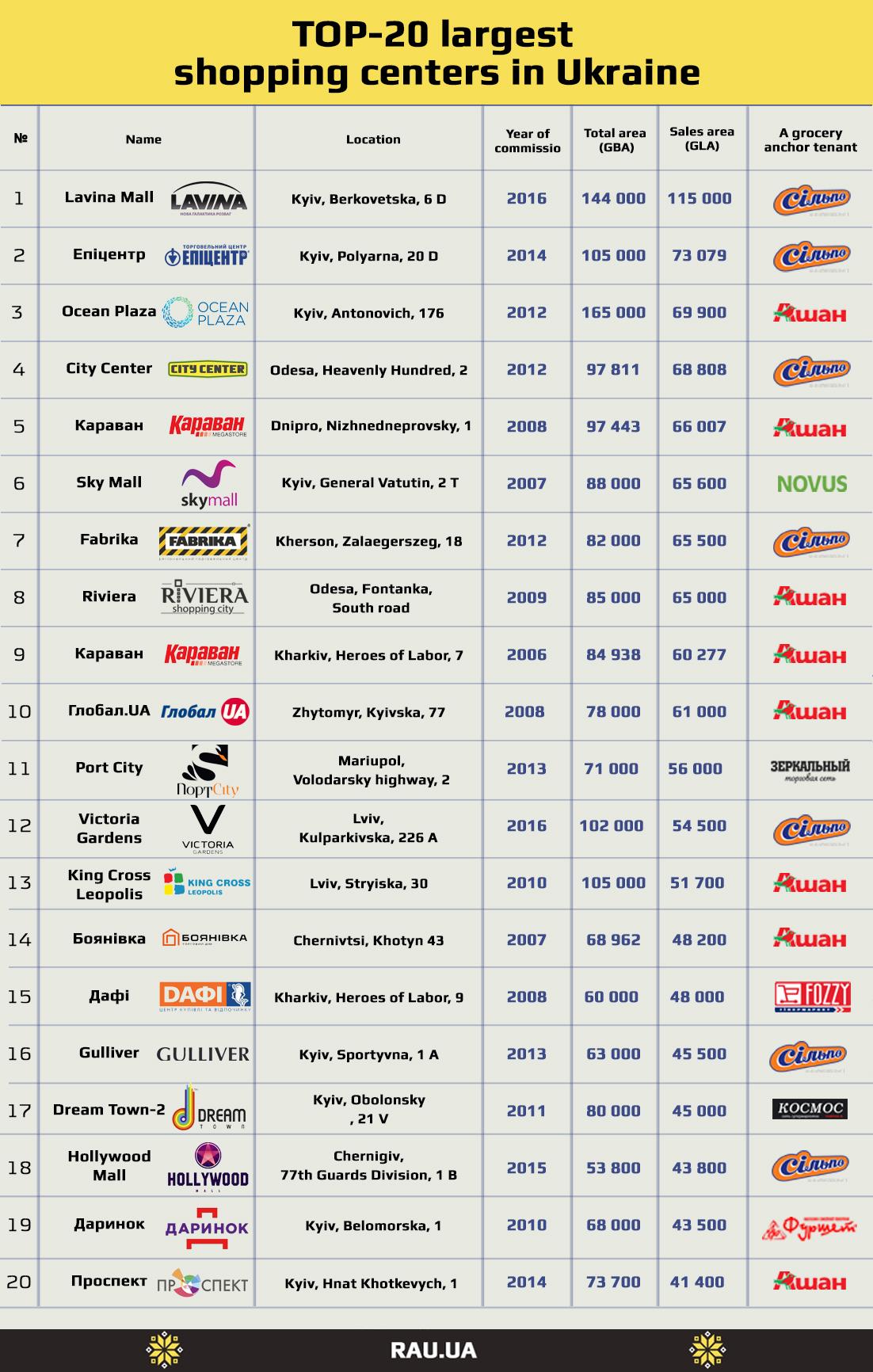 “The twenty of the largest SCs in the country are only 6% from the total objects’ number (about 300). But at the same time, more than a quarter of the highest quality retail space in Ukraine is concentrated in these 6%. In the near future, the concentrating quality squares’ process among large objects will continue”, – Maksim Gavryushin, Chairman of ICSC Ukraine and Operations Director of Budhouse Group comments.

As it is seen, the most shopping centers in the rating delegated Kiev – [n all eight objects. Lavina Mall, Epicenter, Ocean Plaza, Sky Mall, Gulliver, Dream Town-2, Darynok and Prospect are among its. And the first three places in the rating are for “Kievans”. Two Odessa SECs (City Center and Riviera), two Lvov SECs (King Cross Leopolis and Victoria Gardens) and two Kharkov SECs (Dafi and Karavan) have entered also in the TOP-20. One representative each was delegated Dnepr (Caravan), Chernigov (Hollywood Mall), Chernovtsy (Boyanovka), Mariupol (Port City), Zhytomyr (Global.UA) and Kherson (Fabrika).

This year, three Kiev shopping centers after opening will enter the 20 largest SCs list in Ukraine, as Dmitri Topolskov, Head of the Ukraine Research Bureau (URB) and Chairman of the ICSC Ukraine Research Group, notes. “The rentable square of ​​the 20 largest SCs in Ukraine will increase by 114,000 sq. m, and its share will be 26% of all Ukrainian SCs total GLA with the commissioning of the SC Blockbaster Mall, SC River Mall and SC Retroville first stage”, – the expert says.

In turn, the Co-founder and Chairman of the Board of the Ukrainian Retail Association, Andrey Zhuk, draws attention to the fact that, unlike Kiev, in the regions of Ukraine there is practically no active development of large-scale retail real estate projects that could enter the TOP-20 shopping centers in the country in the coming years. “The next year, only one shopping center is declared to be commissioned in the regions of Ukraine, which can claim by size to be included in the rating. Kharkov SC Nikolsky, 57,000 sq. m sales square, can become the largest regional shopping center opened since 2012, when the Odessa SC City Center and Kherson SC Fabrika started operating in Ukraine”, – Andrey Zhuk says.

We also offer to pay attention to the anchor grocery operators in the 20 largest regional SECs in the country. There are shops of two large FMCG retailers – either Auchan or Fozzy Group in the shopping centers majority (in 16 out of 20). At the same time, Auchan – 8 hypermarkets – is the leader on the number of stores opened in the largest shopping centers in terms of retail chains. Silpo chain is in the second place, which is represented by 7 trading objects. Fozzy C & C, Cosmos, Furshet and Zerkalny stores work still in five largest SCs in the country. At the time of rating publishing, the grocery operator was not working in one of the objects. The vacated space was leased, after the Auchan hypermarket closure in the Sky Mall SEC, by a Novus retailer, but its opening is scheduled only for September 2019.

The Editorial RAU expresses sincere gratitude to the Ukrainian division of ICSC in Ukraine for its assistance in collecting and analyzing information, as well as personally to the Chairman of the International Council of ICSC Shopping Centers in Ukraine Maxim Gavryushin and Director of Ukrainian Research Bureau Dmitry Topolskov. 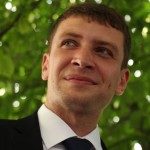